Crossover episode! Living Machines and Ugly drummer Quinn McGraw (also Into the Machine podcast) join us in this epic discussion of a variety of topics including the evolving Okanagan music scene, nu metal movement and its relation to melodic death metal, and the growing venue crisis in Western Canada.

Quinn hosts his own podcast called Into the Machine where he invites single guests on his show to talk about the creative mind and dig deep into what makes someone an artist.

It was a pleasure to meet him and learn about his life. He’s a really neat guy and it was a lot of fun. Terence and Quinn have been friends for awhile so they spend most the time talking which is not necessarily bad considering how great this episode turned out!

Terence and Quinn spend some time talking about nu metal and the impact it had on the entire music industry. Growing out of North America this movement spawned many global acts that to this day are still extremely popular and some that are not.

Oh Terence will love that one!

We thank Quinn for coming out to do this and Kettle River Brewing Co. for hosting us in their brew room! Also support his music!

Bands mentioned in this episode

After a weekend of two sold out gigs in Kelowna we have a lot to say about what we saw and heard. Have you ever heard the soundtrack to Doom 2016? Since we can’t stop listening to it we decided to give it some discussion! The show down between two melodic death metal bands is on. Hold on tight as we compare two bands that are and yet are not similar.

What happened the last week?

Mick Gordon’s video on the Doom 2016 soundtrack.
The 4 Easter eggs hidden in his music. On Feb 7th the final easter egg was discovered 2 years after the game’s release.
Doom Annihilation trailer.
Other
When people wear shirts from bands they don’t listen to or don’t understand where it’s from.
Upcoming
3rd round of Wacken Battle of the Bands at Muninn’s Post March 23rd.
Bands Mentioned:

I had never been to a deathcore gig before and I thought there would be no better time to start than today with a sold out show at Muninn’s Post. In fact I haven’t really listened to deathcore in general. So I took the opportunity to listen to the bands all afternoon before going to the gig. Aethere struck me as more technical and death influenced than core so it was a lot easier for me to get into and I quite enjoy their newest album Open My Wounds. So seeing them live was going to be interesting to see how they performed their songs.

Ugly was the opening act. A local hardcore band playing their first live gig in support of their new release VILE. I’m kicking myself for not have gotten pictures or video. They put on a good show, sounded very tight and had me second guessing if Vultures were actually playing. The topless singer wearing a balaclava was a great touch and was very fitting to the lyrics. I’d definitely watch them perform again!

Vultures also put on a good show. It was entertaining to watch them from the back. Everyone was quite into it and the music sounded good. Hardcore is something also I haven’t really gotten into though I definitely see the appeal.

Aethere put on a great show and the crowd was really into it! Lots of moshing and crowdsurfing. It was really awesome to see how supportive the fans were with the crowdsurfing. Deciding between songs who’s going to be hoisted up and then everyone doing their part in carrying the crowdsurfer away from the stage. It looked like a lot of fun and really helps bring the people together to help one another out. 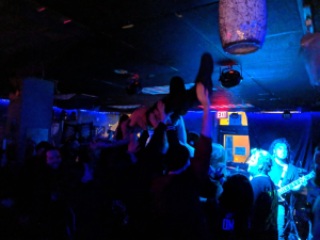 
Aethere – Open My Wounds:
Enterprise Earth seemed to put on a really good show as well. I was very conflicted by these guys. Their albums sounded very deathcore without much death metal influence (unlike Aethere). Because of that it didn’t really sit well with me. I was waiting to see them live to see if their live performance changed my opinion. Sadly it didn’t really. I will have to give this band another chance to try and get into deathcore.

From what I have heard of the genre so far I understand the fushion of core/punk and death metal. It is an interesting blend that produces some styles that are very different from traditional metal genres.