Power and heavy metal takes over Muninn’s Post! ArkenFire headlined a show Friday night at the local Feast Hall along with Tzimani hailing from San Diego and progressive instrumental metal act Indecipherable Noise from Peachland, BC.

Instrumental progressive metal project of local talent Jevon Carignan (guitar), Dylan Gutierrez (guitar), Vaughn Janes (bass), and Mitchell Corbach (drums). They play a style influenced by Animals as Leaders and Rush. A great way to warm up the crowd and get people on their feet before the main acts took stage. I quite enjoyed it and they seemed to have some really nice ideas there.

This two piece hailing from San Diego shredded their way through their set. Straight up heavy metal brothers rocking their way across North America. Eddie can really play the guitar. Each song they played were full of mean riffs and ripping solos. 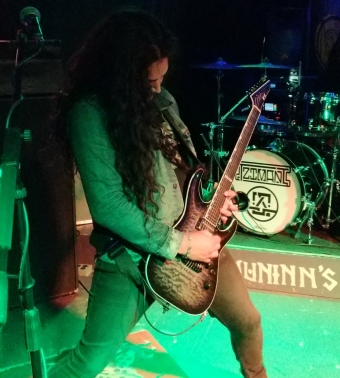 Their self-titled EP came out a year ago so still being somewhat fresh they played most songs off it. I’m not aware if they were playing any new material. Their songs have catchy choruses and great solos. There isn’t much more to ask for from a heavy metal band!

I only had time to stick around for the first three songs. Morning shift beckoned. Raid Winds and Night Sister were the first two songs played. I do not recall the third. The band sounded just as good as at Wacken Battle of the Bands. These guys are on fire every time they play. It is a real treat to watch them on stage and they definitely deserve a larger one at that. There is a soft spot in my heart for heavy/power metal and have been for years. 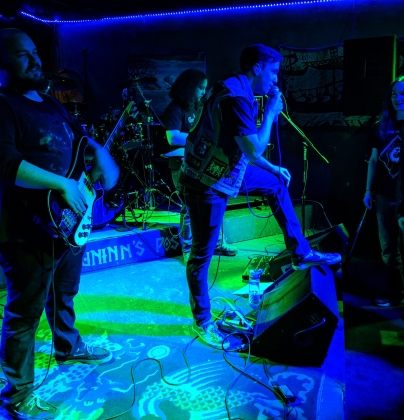 There were lots of familiar faces among the crowd and a couple new ones. I brought out my good friend Justin who really enjoyed the music, met some new people and had an overall great night. He’s a huge fan of all genres of music and always a fan of metal but just doesn’t come to shows very often. That’s about to change! It always makes me feel good to see both familiar and new faces. The fan base here is a dedicated bunch of people who all contribute to the scene in their own interesting and unique ways.