After a wild Wacken Battle of the Bands Erik road trips to Kamloops, BC where Wolfheart is playing a one-off show with Dead Asylum and Shatterless. During his time there he meets up with the Gladius Sky vocalist Taylor Pottle to chat about the band and his business T&A Production. He also meets up with Justin Bentley from Shatterless to chat up the Kamloops metal scene and what it’s like to be a hard rock band in a smaller city.

During their tour with Children of Bodom and Swallow the Sun, Wolfheart scheduled this one off show in Kamloops, BC with Vancouver death/thrash act Dead Asylum and Kamloops’ own Shatterless.

I originally wanted to take the 4-5 hour trip down to Vancouver to see the Children of Bodom tour. This is something I have normally done throughout the years. Last time they were in town I went down to see them play their 20th anniversary tour. But having seen them so many times (7 I believe now) and Swallow the Sun as well. I had decided to sacrifice seeing Wolfheart live and NOT go down for the show.

This was before I had heard the new CoB album Hexed in its glory. Now I am kicking myself for deciding not to go. Well almost.

When I found out Wolfheart was to play a headlining show in Kamloops with two local acts I had to jump all over it. Especially for only $10!!! And in a city I haven’t seen a gig at before. This was a chance to also make some connections in the local scene.

I worked the night shift the night before the show. So I was forced to sleep the morning of the show and drive up to Kamloops in the afternoon. As I do with all gigs I attend (granted it’s available) I checked out past setlists on Setlist.fm and made a couple of Spotify playlists of Wolfheart and Dead Asylum‘s most recent sets. These were basic guesses considering I wasn’t sure how long a setlist Wolfheart would play and the Dead Asylum setlist I found was 1.5 years old.

I had one ear in through my nightshift playing the Wolfheart playlist. The drive to Kamloops was spent listening to a mix of Wolfheart and Dead Asylum. I hadn’t had time to seek out and listen to Shatterless which I felt bad about as I am always wanting to listen to fresh new music.

I arrived an hour before the doors opened so that managed to give me some time to seek out Taylor Pottle and the Shatterless members after their soundcheck. I had the opportunity to sit down with Taylor for an interview and then with Justin Bentley in an alleyway behind the Blue Grotto as well.

Not only does Taylor put on shows in Kamloops with T&A Productions but he also does vocals with the Okanagan-based symphonic black/power metal act Gladius Sky.

Shatterless kicked it off at 8pm with a three song set which they plowed through very quickly with the 20 mins they had. I am now listening to their album on Spotify and, yes, they’d definitely need longer than 20 mins taken the length of their songs.

They put on a really good performance. Progressive heavy rock with some metal influences. I found Justin’s vocal range from clean melodic to death growls/screams to be very well performed along with (other) Justin’s drumming sounding very tight. It was a pleasant surprise to hear how well they were live.

You can listen to their album Galactic Sorcery on Spotify and contact the band on their Facebook page to support them by purchasing it.

Mike turned out to be extremely comfortable on stage and interactive with the crowd. His intensity along with the shredding of Jay and Roger enhanced the music beyond how it sounded in the studio. Samantha may not have been playing her own drumset but that didn’t stop her from sounding tight and keeping the songs driving forward. 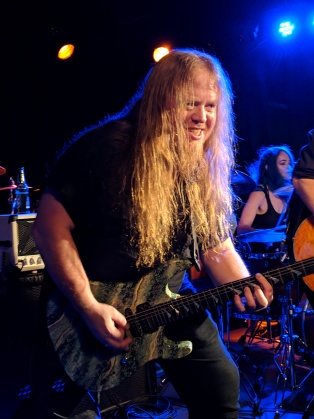 I’m really looking forward to their Kelowna show that is coming up.

You can purchse Dead Asylum’s music from their Bandcamp page.

I’ve always felt Tuomas Saukkonen was one of those artists that changed his projects when he either received a new source of inspiration or felt his own writing and playing skills had reached a new level.

His previous projects had always been part of my rotation. Not heavily rotated but I always checkout out his newest releases and have had a very soft spot for his style of melodic death metal. It is a very Finnish style with long melodies that have a very melancholy overtone to them.

While I was living in Kouvola, Finland I had met a fellow named Mikko Heikkilä who, at that time, was playing in the gothic metal band Sinamore and Tuomas’ then project Black Sun Aeon.

During this time (this was 2009-10) I was also part of an amateur photography club in Kuusankoski called Versus. We had one photoshoot take place with a band. Now with this part my memory is a little fuzzy. I cannot remember if it was Sinamore or Tuomas’ project Before the Dawn. Some research into the bands shows that Mikko was never in Before the Dawn.

Also my trusted list of gigs I’ve been to shows that I attended Before the Dawn and Black Sun Aeon on May 14th, 2010 at the Donnington Rock Club in Kouvola. I also saw Sinamore and Black Sun Aeon play at the Dark River Festival in 2010. So I have some history seeing Tuomas and related projects perform live.

This show was quite dark. The lights lit up the backdrop with almost nothing in the front so it made for a dark setting. It fit very well for the music but as for my footage maybe not so.

I had been listening to my Wolfheart playlist which was a full set that they had almost matched. I recall hearing Aeon of Cold, Strength and Valour, Zero Gravity, I and Ghost of Karelia. It didn’t seem to be a complete set. Maybe 45 minutes. But damn did the band put their all into it. The only things I could think of which dampered the show slightly were the keyboards and acoustic guitars were all pre-recorded.

I also met up with Mikko Kotimäki and Juho Räihä from Swallow the Sun who were just hanging out at The Blue Grotto enjoying the night off. Juho is from Kouvola so I got to spend some time reminiscing on the old times of living in Finland.

Throughout the night I got to meet a few new people. One person in particular was a man from Revelstoke who visits Kamloops often for work. He does his best to plan his worktrips around live music events due to him being a musician himself. Metal isn’t really his go to for music but he loves coming out to metal shows because of the sheer talent these musicians have. I do remember his stating he played bass(?) in a band of his own but I do not recall him telling me the name of it. That’s too bad because it would have been nice to hear his band too!